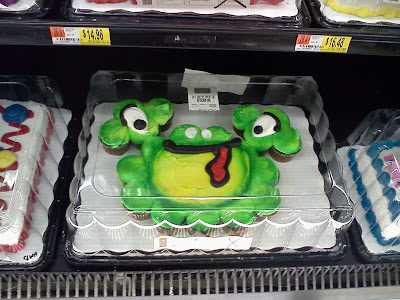 Well, that day that every lowly geek dreams of happened for me earlier this week.  Yes, a famous geek took the time to personally send me an e-mail!  This is the 21st-century answer to the signed photograph in reply to a fan letter, and I was totally thrilled about it.

So, the famous geek in question--she's not just A famous geek, she is currently THE reigning queen of geekdom.  Her name is Jen; ironically, I don't actually know her last name, and I rarely think of her just as "Jen."  I usually think of her as "Jen and John," since her husband is an integral part of the geekery.  Jen (and John) runs the website called Cake Wrecks, and if by some miracle you read my blog and HAVEN'T heard of Cake Wrecks, you poor, benighted soul, let me give you a quick run-down on it.

Cake Wrecks is the place where those "professional bakeries" that are part of Super Wal-Marts and Targets and what-not get called out in front of the entire internet to answer for the travesties they create and have the nerve to sell to an unsuspecting public.  It's not as mean as that might make it sound, but it is dripping with sarcasm, which if you're going to geek, is the only proper way to geek, really.  A geek who has lost his sense of sarcasm isn't a whole geek any more.  To balance out the hard-core cake critiques that make up her usual fare, Jen also does features on beautiful, unbelievable cakes that you'd swear must be molded from clay or something other than actual food, just to demonstrate that it CAN be done correctly and THAT'S why she's so tough on people who do it so very incorrectly.  The photo at the top of this post is an example of the kind of cake catastrophe we're talking about here; I took that particular photo myself at a local store, and when I tell you that I sent it to Jen but it didn't make the site because it wasn't ENOUGH of a wreck, you can probably get a feel for the scope of baked devastation she finds.

Anyway, besides singing my mother-in-law's praises on this blog for giving me the geek-tacular gift of Lego's for my birthday, I also sent a shout-out to Jen about it, because she likes to hear how her loyal geek subjects are doing from time to time.  I really didn't expect to hear back from her, but I did, in a very sweet e-mail that made not just my day, but...well, my life, really, to this point, with the two big exceptions of my marriage and my daughter's birth. 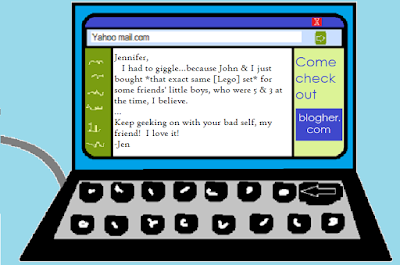 Email ThisBlogThis!Share to TwitterShare to FacebookShare to Pinterest
Labels: Geekery