Yes, I know, we've covered this ground before.  If you're one of the few faithful who were with me from this blog's beginnings, or if you've thumbed back through the archives, you know that there's something oddly familiar about the theme of this post.  Well, I wasn't stranded for ideas; this "Indiana in the Fall" thing is a strange malady that steals over me and afflicts me anew every...you know...Fall. 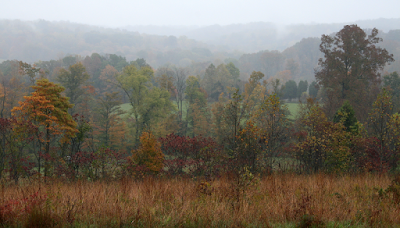 Look at that picture.  Would you not pine for that if you had known it all your life and then found yourself living in a semi-desert region of Washington state?  (I know, ever since you saw Sleepless in Seattle, you've thought that Washington is one of the rainiest states in the Union, right?  Yeah, well, it is...in Seattle.  I live in the Tri-Cities, which are affectionately referred to as the Dry Shitties.)  Don't get me wrong; there are things I really enjoy about where we live now.  Moreover, there are things I really DID NOT enjoy about living in my hometown.  Of course, all of us go through that stage, I suppose.  But I still find it frustrating, whenever I go home for a visit, that they basically roll up the sidewalks at about 6:00 pm and lock them away for safe keeping inside the stores and restaurants until the next morning.  How's a night-owl supposed to have any fun like that?

None of that changes the fact that I have always adored my home in the Autumn, and especially the Old Settler's Days festival.  Every year, the same group of vendors sets up the same wares under the same awnings in the same locations on the lawns of the historic John Hay birthplace, the Stevens Museum, and the Museum's Pioneer Village.  Every year.  I'm sure there are slight variations, but they're really not dramatic enough to notice.  Every year, the doors to the Stevens Museum are thrown open so that visitors can browse the exhibits in what really is a tiny museum to someone who, like me, has ever visited and fell hopelessly in love with the Metropolitan Museum of Art in Manhattan.  (Really, that museum is the one redeeming quality pretty much for the entire state of New York.)  And I love every minute of it.  I have some sort of internal homing device; I turn into a swallow at the beginning of each September, and those booths with their handmade goods on display are my Capistrano.

The festival is an amazing event, because it's a glimpse into the fact that Salem really is the "beautiful, old-fashioned town" that a commenter called it on another blog I read today.  The best Old Settler's Days are the ones during years when Fall has arrived early.  A summery Old Settler's Days is a muddy, hot, sticky event with too much sweat and too many people packed into too little square footage, but when the festival and Autumn coincide, magic happens.  The crisp, cold air makes the various campfires and the hot apple cider welcome attractions, while the beautiful turning leaves on the trees, the decorations of Autumn corn, pumpkins, and hay bales, frame the buildings of the John Hay Center like something out of our favorite Thanksgiving craft projects from childhood.


For just a few hours, you can walk around the historical reconstructions of the pioneer village with its schoolhouse, dry-goods store and jailhouse, watch the re-enactors making dip candles and weaving on a giant wooden loom, and feel like you're really there in the 19th century.  It doesn't matter that you've seen it all countless times before.  You're already hoping it will be an Autumn Old Settler's Days again next year.

We're two weeks away from the festival, and it looks like I won't make it this time, but I already have high hopes for next year.  By then, the SuperToddler should be old enough to enjoy it all.  I was probably around four the first time my parents took me there.  It'll soon be time to continue a family tradition.
at 12:55 AM