The documents upon which our country is founded, and of which we are most proud, were banned reading in their day, or at least, they should have been under the laws of the time.  Every phrase that Thomas Jefferson penned in the American colonists' declaration of independence was treasonous, as was the act of drawing up a constitution, forming a government in direct opposition to the monarchy to which every man in the room had once sworn loyalty.  These were dangerous, seditious documents, and though they contained no lovers in flagrante delicto or boy wizards waving sticks in the air and shouting fake Latin, they were every bit as distasteful to some readers as explicit sexual narratives and magic-laden fantasy fiction are to many readers today. 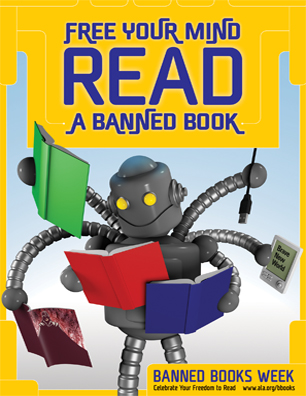 This is Banned Books Week, and it calls up a torturously complex subject in our society--how we respond to those with whom we disagree.  The principles of democracy are already an exhaustively preached sermon in American life, and especially in American politics, but all bets seem to be off when certain subjects are broached in our reading material, particularly in books aimed at our children.  The subject of banned and challenged books is one about which I feel very strongly, not least because I used to be such an ardent supporter of censorship.  As a proudly self-proclaimed Fundamentalist Pentecostal, I actually took a white-out pen to my novels, denuding them of anything that I found morally objectionable.  Of course, I had to survive the first, unsanitized reading in order to do so, but I've always been an avid re-reader of good books, and I didn't want to be faced with the foul language I was expurgating more than once.

The story of my journey from vigilante censor to champion of "radical activist librarians" is a long one, but the upshot is simple.  I've decided that intellectual freedom, rather than suppression, is the only true solution to a host of humanity's ills.  I have a toddler, and there are many things in this world to which I do not want her exposed until she is emotionally ready--and a few to which I profoundly hope she will never be exposed at all!  But in my mind, the process of helping her develop, mature, and acquire the skills to make good choices for herself about what she reads, is simply parenting.  No doubt I will fail at times.  Nevertheless, I consider censorship no solution to anyone's problems, not to mention an excellent way to someday find yourself or your descendants burning books.