Penguin Books, to the best of my knowledge and memory, has never given me so much as a free #2 pencil.  (They sent me a couple of free catalogs once, when I requested them, but they do that for everybody.)  The following gush is completely unsolicited; I just love Penguin, and always have. 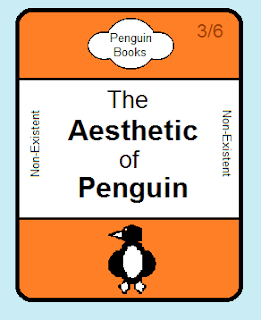 Can anyone explain to my satisfaction why I, like generations of Britain's bibliophiles and casual readers, should be so utterly captivated by one of the world's simplest book cover designs ever?  I mean, I can take a guess why Penguin's multiple but dead-similar lines of covers were popular for decades.  The clean lines, the clear, crisp text, the bright colors that allowed the shopper to distinguish at a glance between genres, all combine to create an aesthetically superb effect.  I understand that.  Now that we've all finished being amateur marketing experts for a moment, let me just say that those perfectly reasonable-sounding arguments still don't answer my question.  You see, they don't satisfy me; they are NOT "to my satisfaction," as I requested, whereas the plain-jane Penguin cover, monochromatic and seemingly unassuming, is deeply satisfying to the souls of both my inner art critic and my inner bibliomaniac.

I must admit, I had never seen such a Penguin cover in my life until about two months ago; until then, I had only ever encountered the more contemporary yellow-jacket version typical of university bookstores, or the latest, sleekest, predominantly jet-black model which was rolled out by Penguin at about the same time that I started graduate school.  My ignorance of Penguin's iconic image of a by-gone era stems largely from one simple fact; I always bought and read Penguin USA versions.  More and more, however, I have insisted on having copies of books from their country of origin whenever possible since I began collecting the British originals of Harry Potter, and when I stumbled across Penguin's postcard collection on Amazon, I was hooked.  It was a side of Penguin I'd never seen before.  The British side.  The aspect of a famous publisher from a time when even its paperbacks were wrought with a level of care and skill rarely met with today in any format from any publishing house.

Of course, the blogosphere has been abuzz with the gorgeous new Penguin hardback classics (one of which, Cranford, I reviewed in an earlier post), and though these beauties bear no resemblance to the 20th-century Penguin triband at all, I love them, as well, and am slowly collecting them.  (It's going to be REALLY slow collecting, though, since I'm not supposed to be buying any more books in the immediate future.  I know; good luck with that.)  AND NOW, I learned from a fellow blogger today that Puffin, Penguin's children's division, is publishing ITS classics in adorable, newly-designed hardcovers, as well.  Christmas presents, anyone?  I cannot allow there to be a nice edition of Anne of Green Gables somewhere out there in the world of which I don't own a copy!  Seriously--I have no idea how many copies of that book I actually own.  It's getting ridiculous.  I can't even tell myself that I'm buying and saving them for Brigid, because she doesn't need five copies of the same book any more than I do.

Anyway, this meandering panegyric to Penguin of a post is all in aid of saying only this--I can't wait until Thursday (payday), when I can order my used copy of The Case Book of Sherlock Holmes--one of the missing volumes that I mentioned in my last library project post--in all its green-banded, Penguin-ish, 1959 glory!  Hey, at least it only takes a small, used paperback novel to make me happy, and I'm certainly not the only one.  There's even a Penguin Collectors Society!  Who knew?!
at 1:49 AM