I Demand a Re-do!

The day just ended was certainly a momentous one.  Let us be perfectly clear--one aspect of it was a decidedly bad thing.  Nevertheless, it was momentous.  Let's get the bad news out of the way first, shall we?

﻿﻿﻿﻿﻿
It's the kind of thing that rends a mother's heart.  My beloved Brigid the SuperToddler chipped one of her two front teeth today.  She was blissfully playing on the couch, laughing at the adventures of her latest Nick, Jr. crush, Pocoyo, when she fell off the couch literally teeth-first.  Dammit, why does it ALWAYS have to happen when they're enjoying themselves the very most?  It makes such a sweet moment--listening to the giggling with utter abandon that only a toddler can do--instantly become such a sad one!  I count my blessings that she did not injure her mouth in any other way, no bleeding or swelling, and based on the dentist's phone advice, she seems to be fine.  I have some signs I have to watch for, but if none of them occur, we just let her go on about her merry way.  Within half an hour, she was laughing again and showed no signs of the tooth being tender, or indeed that anything negative had happened at all.  Still, it was most of the day before I could let go of the guilt that we mothers are so good at flailing ourselves with, even though there was absolutely nothing I could have done.  I can't bear to think that tooth will be that way for another three or four years, but all I can say at this point is, THANK GOD for baby teeth!!!  When I was a kid, I kind of used to think of this system as one of the Almighty's more cruel jokes; after all that trouble of teething, then I had to lose them, bleed and freak out and everything, and grow new ones AGAIN?!  (It probably would've helped if my parents hadn't banned all mention of Santa Claus and Tooth Fairies from our house.)  NOW, I understand the wisdom of His plan on the whole teeth issue. 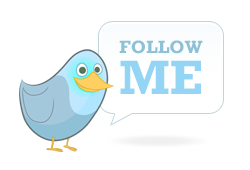 But, on a lighter note, I took a bold step into a brave new experience today, and finally opened a Twitter account.  I have to say honestly that I don't see myself using it nearly as often as I do Facebook, but then I refused to get involved with any social media outlet for years and cannot imagine living without them now.  So many bloggers are on Twitter, it seemed like it was high time I got involved.  However, I'll completely come clean and admit that I'm hoping to increase my Klout score, not so that I can say I know how to win friends and influence people, but because I'd like to be eligible for some of the major book perks!
﻿﻿﻿﻿
at 12:27 AM