Review of "A Christmas Carol"

Oh, good grief!  How can anyone still offer a review of "A Christmas Carol", as if this story hasn't been done to freakin' death?!  Yeah, I know.  But I read it for The Christmas Spirit Reading Challenge, and my policy is, if I read it, I get to review it.  Especially a book that I have this much history with.  It was fascinating to compare my view of it now with what I remembered of it from having last read it when I was about 11. 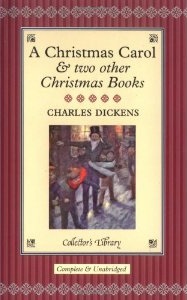 A Christmas Carol
by Charles Dickens
(Completely useless side note:  Did you know the man had 10 children?!)

Do we REALLY need a synopsis of this one?  I'm kind of doubting it.  Stingy miser.  Four ghosts (total; think carefully).  Change of heart.  " 'God bless us every one,' said Tiny Tim the last of all."  Let's move on.

My strongest overriding impression throughout this book was, "I read this when I was ELEVEN?!"  I have a pretty clear memory of what my vocabulary and field of experience contained at that point in my life, and I have no idea how I got past about page 5 of this book at that age.  There are just so many historical and cultural references to everyday British Victorian life that I know must have sailed right past me.  However, I have some vague memory also of plunging straight on, knowing that I was alreay familiar with the outlines of the tale from television and films, and that it didn't really matter that much to the story what a "cravat" was.  (Now that I know what a cravat is, it still doesn't matter that much to the story, frankly, so I guess I was right.)

Still, I enjoyed the book a lot more this time, when I could grasp so many more of its subtle nuances.  Those of you who participate in Wondrous Words Wednesday will know that I dedicated an entire post to the number of English words which have changed meaning since Dickens penned them, which was educational in itself and also quite fun to investigate.

Believe it or not, this book did contain one big surprise for me, as I had completely forgotten some of the more nuanced elements.  My beloved husband, aka Good Man Michael, often complains that Dickens was the beginning of the end of the Western world seeing Christmas primarily as a religious holiday.  He used to insist that good old Charles made us all think mostly of social justice issues, rather than the birth of Christ, around this time of year.  I can fully understand why he thought so--he's never read the book!!  He's only ever seen the same 40,000 adaptations of it that we've all watched over the years.  Even I had begun to think he was right, until I read the book and discovered that Dickens makes his views of "the Reason for the Season" extremely clear.  (I really kind of hate that phrase, by-the-way--it's so kitsch and cliche and smarmy.  But, in this case, it gets the point across.)  He also has a few choice words for those religious leaders who were actually contributing to the misery of the London poor.

A Christmas Carol is both feel-good Christmas story and harsh indictment in pretty much equal measure.  I think maybe that's why we all go back to it year after year.
at 12:35 PM