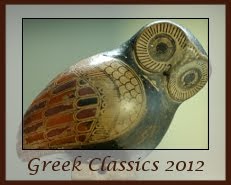 Here we go again.  Yet ANOTHER reading challenge that I simply CANNOT resist.  In this case, it's also a matter of turnabout is fair play.  After all, Jean at Howling Frog has already joined up for my 2012 Medieval Challenge, and I'm requiring that she read at least four books!  Since she's made it so easy on me and is only demanding ONE Greek classic read, the least I can do is return the compliment.

Backstory time.  I read a LOT of Greek stuff (in translation, of course) in college.  The first class I ever attended on my first Monday as a freshman was an Honors program course entitled "Classical Cultures of Greece and Rome".  We spent the majority of the semester dissecting The Iliad, and the rest of it on fascinating plays like Lysistrata, which is one of my favorites and is hilarious, and if you don't know why, you REALLY need to read it--I'm not going to give it away here.

So, the Greeks and I have a lot of history, but I must confess a major defect in my classical education: I've never read The Odyssey all the way through.  That will be my project for this challenge in 2012, especially since it also meets the requirement to "Read Your OWN Library!" and my Victory Garden.  So now I'm officially committed to reading more books in 2012 than there are weeks in the year, ALREADY.  I really need some kind of intervention.
at 8:17 PM