So, presumably, since others have started linking up to the 2012 Medieval Reading Challenge, the host should do the same, shouldn't she?  Without further ado, then, let me announce the titles that I hope to read, so that it can be here in print to haunt me in case I fail utterly.  :> 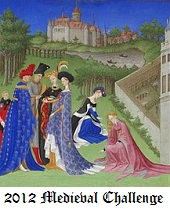 Naturally I have chosen the Paradiso level, meaning I must read 12 medieval books from at least 4 different genres between January 1 and December 31, 2012.  Here are my choices (note that those with an * beside them also qualify for my Read Your OWN Library! Challenge, meaning I've owned them for ages and never yet read them, while those with a ^ beside them will be planted in my Victory Garden):

Biography--
The Confessions, by St. Augustine of Hippo*^
The Life of St. Columba, by St. Adamnan of Iona*

Literature--
Beowulf *
History of the Kings of Britain, by Geoffrey of Monmouth

Women--
The Alexiad of Anna Comnena*
The Book of the City of Ladies, by Christine de Pizan

And there you have it.  Twelve different books in six separate genres.  Now all I have to do is actually read them!
at 1:18 AM