Review of "The Hound of the Baskervilles" 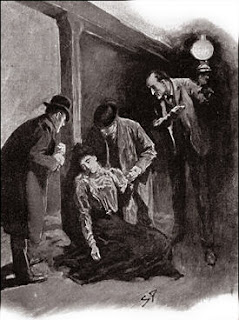 The Hound of the Baskervilles
by Sir Arthur Conan Doyle

I'm just going to announce right up front that I really liked this book.  It wasn't the most earth-shattering book I've ever read or anything, but the chemistry between Holmes and Watson simply works, and apparently will never go out of style (at least until modern English evolves to the place that Victorian English becomes archaic).  So, to set the scene...Holmes and Watson are informed by a country doctor that a friend of his, Sir Charles Baskerville, has died under suspicious, maybe even otherworldly circumstances.  The doctor fears that Sir Charles' heir, Sir Henry Baskerville, may also be in danger.  Holmes and Watson have to unravel the sinister from the superstitious and figure out what the Hell is going on, which they eventually manage to do, of course, as always.

This may be a tiny bit of a spoiler--not much of one, though, I promise; I HATE real spoilers--but I have pretty well decided that I don't like my murder mysteries to contain epilogues.  This is the second mystery I've read lately that was really good right up to the epilogue, at which point it just felt anti-climactic, as if the author had felt like taking the easy way out at the last minute.  Conan Doyle's epilogue is pretty well-crafted, and fits in with the motif of demonstrating how Sherlock Holmes is ALWAYS in command of what happens during his investigations, so it doesn't have the smack of authorial laziness as strongly as many epilogues do.  Still, I wish he'd chosen a different way to wind up the action, which was quite thrilling and thoroughly satisfying--right up until the epilogue.

So, I really enjoyed the book, and that's not a big surprise, is it?  There's a reason Holmes and Watson have been popular for over 100 years and are still going strong.
at 4:26 PM